One of my favorite features of the Tube Expander is the effects loop. That's because most of my amps don't have them. Even better, the TAE's loop doesn't follow the preamp like the built-in loop on a guitar amp, it's after the entire amp. When your sound relies on power amp overdrive, that's a fantastic sounding way to run certain kinds of effects. In fact, in order to do that some pro players mic up their amp, run the results through a mixer to add effects, then send the wet signal to full-range speakers or monitors. I know that Larry Carlton, Eric Johnson, and John Mayer have all done this at some point in their gear evolution. Frankly, that's way too much of a logistical hassle for me, but fortunately the TAE lets you do it all "in the box". That capability is nothing short of awesome.

Many tube amps have simple unbuffered effects loops. This means that the send jack is outputting a high impedance signal which, like the signal from a guitar’s passive pickups, will result in tone degradation over long cable runs. This isn’t an issue when your amp and effects are in a rack and the cable lengths are short, but nowadays a lot of players (including me) run long cables in the loop going out to their pedalboard and back in order to keep the pedal’s controls and on/off switch accessible. If you do this with the unbuffered loop common in many tube amps, you’ll need to add an external buffer to the loop to prevent the tone loss. But the TAE’s effect send output impedance is 1kΩ – a nice, low impedance signal – so long cable runs in the loop are no problem.

The TAE's loop is also pretty flexible. It supports both series and parallel operation, and there’s a -10db/+4db level switch to deal with everything from stomp boxes to pro audio rack effects. It provides ground lifts on both the send and return jacks to resolve any ground loop issues. And the effects loop can be turned on and off from the TAE's front panel, the GA-FC foot controller, or programmed into a Rig.

One obvious limitation is that the TAE's loop is mono only. But if it had a stereo loop, it would have needed a stereo power amp as well. So I imagine they made that particular compromise to keep a lid on the price of an already pricey product.

Personally, I prefer to use a parallel loop for modulation and time-based effects because it preserves the integrity of the dry signal path. But with the TAE, there can be some challenges to using one.

The first is that the TAE doesn't have send and return level controls. Putting a modulation effect in a parallel loop will increase the volume of the amp when the loop is engaged because you're combining  two signals of roughly equal strength. A level control on the return jack would help you compensate for that a bit. Without one, your effects unit will need an output volume control so you can somewhat match volume levels between the loop on and off. Fortunately, if your effects unit doesn't have an output level control, there's a fairly inexpensive workaround. You can use something like a JHS Little Black Amp Box in the loop following the effects box to give you control over its output level. I've tried it and the JHS box works really well for this.

The second potential issue with using the TAE loop in parallel mode is phasing issues with digital effects. If the wet signal is not in phase with the dry signal, that can result in a very strange and hollow sound when you turn on the loop. This is the not a problem with the TAE, it's a problem with digital effects units. And since so many effects units nowadays are digital, it's pretty a common problem. The first thing you want to do is make sure your effects processor is outputting only the effected signal, with no dry signal. With effects like delay and reverb, this is often enough to fix the issue. But with modulation effects, it usually isn't.

Here's what is going on: 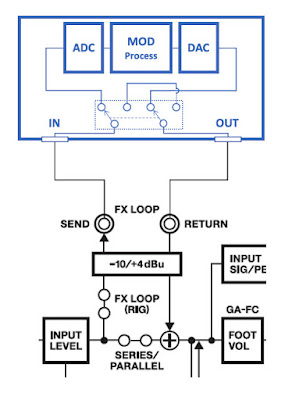 I created this diagram to show a digital modulation effect in the TAE's effects loop. The bottom part of the diagram, in black, is an excerpt from the TAE block diagram showing the effects loop in parallel mode. The top part, in blue, is a simplified diagram of a typical digital modulation effect. When the effect is activated, the analog audio signal first runs through an analog-to-digital converter (ADC) which converts the audio signal into a stream of data that represents the audio as a series of number values. This data stream is processed by the block I've labeled "MOD Process" block. This is the part that actually produces the sound effect. It takes in the data stream from the ADC, does some really fast math on it, and outputs a new data stream (i.e. different numbers) which is a digital version of the effected audio. Finally, the new data stream is run through a digital-to-analog converter (DAC) to convert it to an analog audio signal before being passed to the output of the effect unit and back to the TAE's return jack. When the loop is configured for parallel operation, the effected audio signal returned from the effect is mixed with the dry signal inside the TAE at the point marked ⨁ in the block diagram.

So, here's the issue: It takes time to go through the ADC, MOD Process, and DAC. Digital effects units use fast microprocessors to minimize that time, but no matter how fast it does it, the round trip takes time. This means that the effect signal is always going to be slightly delayed relative to the dry signal in the TAE. When they're mixed together, those two signals are not going to be in-phase and that's going to cause the strange hollow sound I described. I'm not going to explain audio phase in detail, but if you'd like that information, here's a good description.

Now, if you know a bit about how these effects work, you might be thinking, "Wait a second, a modulation effect is supposed to alter the phase versus the original signal. So why is this a problem?" Well, it's true that chorus, flanger, phaser, and other modulation effects all are designed to produce and exploit phase relationships between the dry and effected signals. But there are degrees of out-of-phaseness. A 90° out-of-phase signal combined with the original signal sounds very different from one that is 180° out-of-phase. In fact, these effects work precisely because changing the phase changes the sound. So it should be obvious that introducing additional delay to the modulated signal means that it's out-of-phaseness is changed and that will dramatically change the resulting sound of the effect. In the case of my Source Audio Orbital Modulator, it made it sound thin and exaggerated. It was like this awesome pedal that I had invested a lot of time and money in, got turdified into a cheap, craptastic pedal. Not cool.

The are only two remedies that I'm aware of for this:

I thought about replacing the Orbital Modulator with a few analog pedals, but I decided to keep the Orbital and use it with a series loop. The Orbital does several different modulation effects, so going analog would have meant adding multiple pedals to my pedalboard and I like to keep things small. Plus, when not dealing with phase problems, the Orbital sounds terrific. Giving up a parallel loop was worth the benefits of a single pedal that covers a bunch of bases really well.

Beyond those gotchas, I've had really good results using the TAE's effects loop. Between the TAE’s loop, the reverb, and the ability to get a cranked-amp sound at any volume level, it really brings vintage-style amps into the 21st century.

Effects In the Studio On Stage

An Intro to Impulse Responses