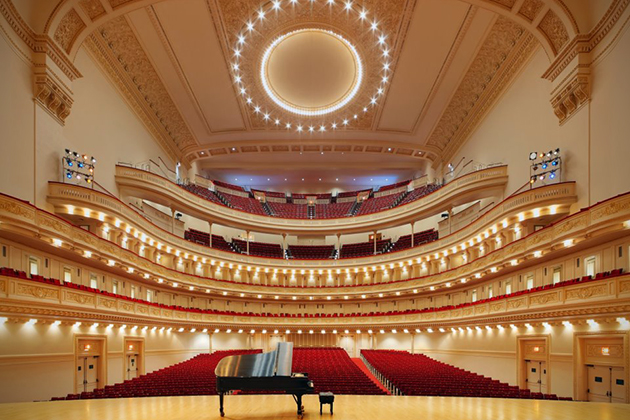 Reverb is created when a sound is reflected off multiple surfaces in the surrounding environment causing numerous reflections to build up and then decay as the sound is absorbed over time by objects in the environment. The most universal example I can think of is the reverb that occurs when you’re talking in a gymnasium or a tiled bathroom. Reverberation consists of thousands of echos, all arriving within a short space of time so that they end up superimposed on one another. We don't hear them as individual echoes, but as a somewhat diffused sustain to the input sound. 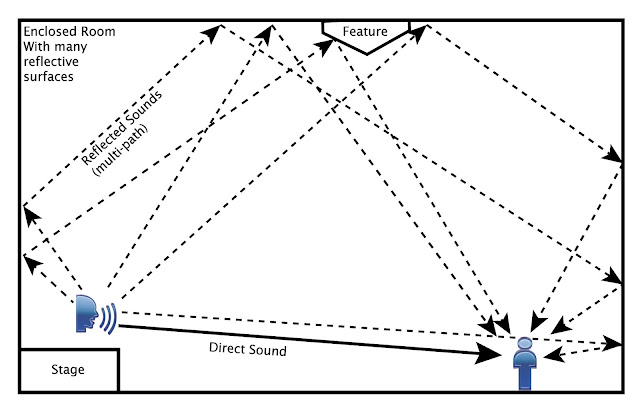 Reverb is a naturally-occurring phenomenon. You might not actively notice it, but it occurs in any enclosed space other than an anechoic chamber. Not surprisingly, you’re more likely to actively notice reverb when you’re in an environment where it is really loud and long – a canyon, a concert hall, or the aforementioned gym.

Capturing reverb used to mean recording in an environment that had the sort of natural reverb you wanted. But since the late ‘40s there have been all sorts of devices invented to simulate reverb – special-purpose rooms known as reverb chambers; electro-mechanical transducers driving metal plates or springs; digital signal processing (which is how the TAE does it); and convolution reverb which uses the same technique used by the TAE to provide speaker cabinet emulation.

Reverb on the TAE

The Tube Amp Expander provides a pretty strong reverb in my opinion. Not all of the algorithms are my cup of tea and maybe you could quibble over the fact that it isn't a convolution reverb. But the TAE is capable of great-sounding reverb of the types you usually hear on guitar, it's very flexible within the architecture of the system, and there's a good deal of control without going overboard on the parameters.

One really nice aspect of the TAE's reverb is its routing flexibility. It has independent sends with level controls for the speaker and line outputs. That's really handy. For live use, it allows you to have some reverb on-stage, while not forcing it on the person running your front-of-house sound. And in the studio, you can have your "comfort 'verb" while laying down tracks, but not commit the reverb to the recorded track. That's a thoughtful touch by Boss.

All of the reverb settings on the TAE are saved with Rigs. That's very nice because it's common t to have different reverb settings for your clean sounds than your dirty ones.

I should also point out that reverb is the only built-in effect on the TAE that has a front panel level control. I love that because the amount of reverb I want depends on where I'm playing and being able to override the programmed level from the front panel is super handy. I only wish there was a similar control for delay!

The obvious choice for guitar reverb is spring and I have to say, I'm a sucker for a good spring reverb.

Unfortunately, the TAE ain't it.

To me, the TAE's spring reverb algorithm is ridiculously fake sounding – too much vibrating, pulsating sproing going on. It sounds almost comically artificial, like a caricature of spring reverb. I’m not terribly surprised though. I have never heard a digital spring reverb simulation yet that I care for very much. Read into that what you will.

I’ve also never been crazy about hall algorithms because they make a guitar sound unnatural to me. Most of the music I listen to sounds out of place in a giant concert hall. A big concert hall sound can be cool when you’re soloing a high-gain guitar all by itself. But usually when I hear hall reverb on a guitar, it makes me think of the ‘80s when records were just drowned in it. And to me that sounds really dated and cheesy. It's all just opinion though and better guitarists than me use hall reverb all the time with amazing results,  so use your own ears and don't get worked up over my preferences. All that said, the hall algorithms in the TAE seem quite acceptable. If I were into that sort of thing, I think I'd be very pleased with the TAE's rendition of it.

Room reverb is more my style. I like room algorithms because they sound more appropriate to the kinds of music I listen to. More intimate and immediate. The TAE offers two different room types. I have preference for Room 1 which sounds a bit less colored to my ears.

When it comes to digital reverb for guitar, I like plate algorithms a whole lot too. You don't see many real plate reverbs anymore. They were one of the first artificial reverbs that didn’t rely on an actual room to create the effect. Compared to natural room or chamber reverb, plate reverbs were considered “manageable” because they were only 8’ x 4’ and weighed around 500 lbs! Plate reverb tends to be bright and dense sounding. And that's why I like it. Dialed in right, it can suggest the tonality of a spring reverb but without the fake sproinginess of digitally-simulated spring reverb.

Let's talk about the parameters the TAE gives you to control the reverb.

Type – The TAE offers a small, but reasonable range of reverb types. Two halls, two rooms, a plate, and a spring. That's not extensive, but it covers the basics just fine. I'm sure there are guitarists who would like more esoteric reverb types for ambient noise kinds of things, but I don't think most guitarists will miss that and there's always the effects loop if you really need it. I've described the TAE's implementation of its reverb algorithms already, so I'll move along.

Time – The Time parameter determines how long it takes for the reflections in the room to run out of energy and become effectively inaudible. Long reverb times can sound amazing on solo instruments, but tend to make a mess in an ensemble context. Although it's not how it would work in nature, when I'm recording I often like to set the reverb time relative to tempo because I like the sustain not to carry over too far into the music. I find this especially helpful with reverb on drums. I might set the Time parameter to the equivalent of a quarter or two. In a live setting, I would never bother with that. I also tend to set reverb Time in indirect proportion to the Level control - as the reverb gets louder, the duration gets shorter.

Tone – This controls the basic EQ of the reverberated sound.

Density – Controls the build up of reflections in the reverb tail. In other words, it controls the number of echos bouncing around in the reverb. A denser reverb will sound smoother and more natural, which seems like a good thing described that way but a little goes a long way. Bringing the density down will result in a grainy sounding reverb, but also more airy.

Pre-Delay – This control enables you to add a gap in time between the dry sound and the reverberation that follows it. Longer pre-delay retains a dryer character to the overall sound and provides some sonic separation between the dry sound and the reverberation. A long pre-delay makes it feel like your next to the sound source in the middle of the room and it takes a while for the reverb to bounce off the walls and reach your ears. Short pre-delay feels more like you’re across the room from the sound source because the original and reverberated sounds are hitting your ears closer to the same time. Long pre-delay provides more articulation and immediacy to the sound which you might find useful for leads, while short pre-delay can help settle a part into the mix better, which can be good for rhythm guitar.

Global Effect Level – This is a master reverb volume control for both the speaker and line outputs. Like all reverb controls, this setting is saved with a Rig, But this setting can also be overridden by the REVERB front panel knob. To be honest, it usually takes me a few sessions to get the overall reverb level dialed in well. I always start off too heavy, then end up dialing it back every time I return until I get it right. I don’t like to be consciously aware of reverb and with fresh ears I’m way more sensitive to that. So it takes me a couple of sessions with fresh ears to really get it dialed in. There are exceptions, but for my usual reverb sound, I like it very subtle.

Low Cut – This sets the frequency at which everything below is attenuated. A setting of “FLAT” disables the cut filter. Heavy reverb on the low end can get really muddy sounding. I will raise the frequency of this control until the mud goes away.

Low Damp –  This sets the amount of boost or attenuation for the low frequency region as set by the Low Cut frequency.

High Cut – This sets the frequency at which everything above is attenuated. A setting of “FLAT” disables the cut filter. With electric guitar, too much reverb on the high-end over-hypes the reverb in my opinion, so I like to back it off a bit.

High Damp – This sets the amount of boost or attenuation for the high frequency region as set by the High Cut frequency. With softer surfaces (e.g., a hall packed with people), the reverb tails will lose high frequencies as they bounce around, producing a warmer sound with less “edge.” If your reverb has an artificial-sounding high end, add damping to create a warmer sound. Damping affects overall tone, so setting it “oppositely” often works well (lots of damping with a bright-sounding song to warm it up, little damping if the song needs more “air”).

Effects In the Studio On Stage