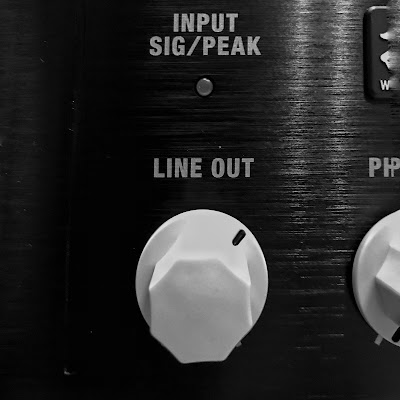 The very first time I used my Tube Amp Expander, I plugged in my Ceriatone DC30. It's "only" 30 watts, but "it's a loud 30 watts" as they say.
I set the TAE back panel Input Level switch to "50W" and I was surprised to find myself lighting up the Input Sig/Peak light in red with virtually every note. The 50W setting should have headroom to spare with my DC30. What gives?
I'm very glad Boss included a the Sig/Peak light because it tells you two important things: First, when it lights green, it simply means that there's a signal present. If you're trying to troubleshoot why you're not hearing anything, knowing whether the signal is getting into the TAE is very useful. Second, when it lights red, it means your signal level is high enough to overload the digital signal path in the TAE. It's actually designed to go red a bit ahead of when you're actually clipping so that you have a bit of headroom to play with. If it goes red every once in awhile it's not a big deal. But in my case, it was going red with every note and I could hear the sound clipping.
After playing with the various controls I found there were a few ways to reduce or eliminate the peak light going red, but they all came with drawbacks:
I settled on turning down the Presence-Z and Resonance-Z controls, but I was fairly bothered by this.
I did some Googling on this problem and found a post on some guitar forum suggesting that attenuators are less efficient at lower impedance levels. Hmmm. I was in fact running my DC30 at 4 ohms (the combined impedance of my DC30's internal speakers). I wasn't sure of the electronic rationale, but it was worth a shot.
I tried running the amp at 8-ohms (also setting the TAE's impedance switch to 8-ohms, which is crucially important). It was still red-lighting the Sig/Peak LED, but less so. And I could no longer hear any digital clipping. So the next time I used the TAE, I set the amp's and the TAE's impedance to 16-ohms.
And low and behold, it worked!
The Sig/Peak stayed a nice, healthy green and there was no egregious tonal degradation going on. Sweet.
Now, sometimes an amp will sound slightly different running at 16-ohms than it does at 8 or 4. But personally, I find those differences very minor. And far less objectionable than turning down my amp, changing the Presence-Z and Resonance-Z settings, or running the TAE's Input Level at 100W. And for what it's worth, a lot of people (especially Marshall players) prefer the way their amps sound at 16-ohm.
Moreover, with the Tube Amp Expander sitting between your amp and speaker cabinet, you can set your amp to whatever impedance you want and so long as the TAE is set to the same impedance, your gear is perfectly safe. The speaker cabinet does not have to have the same impedance as the amp and TAE. So long as the cabinet is rated between 4- and 16-ohms, the TAE's built-in power amp will deal with it. I discuss this in more detail in my post, Power Amp Impedance Matching.
Attenuation On Stage Power Amp