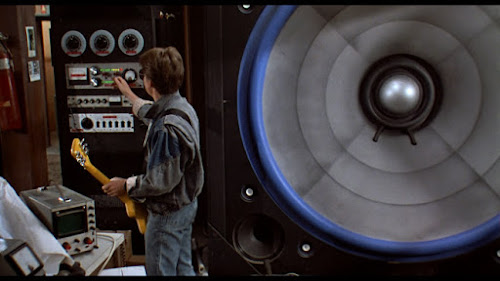 The Tube Amp Expander's built-in power amp is one of its most useful and differentiating features. But one thing I've been wondering about is whether 100 watts is powerful enough. It's long been accepted wisdom that solid state amps are not as loud as tube amps of the same wattage. And I can tell you with some authority that a 100W Hiwatt DR103 is way louder than a 120W Roland JC-120.
Why? Watts are watts right?
Well yes, but watts aren't the only consideration. One reason that tube amps are seemingly louder is because they behave better when pushed to the edge of their power output ratings. In fact, where a solid state amp distorts in a very unpleasant way as you reach and exceed its operational limits, a tube amp will actually sound better, especially in a guitar context. So with a solid state amp you usually want some power to spare so you stay well below its output limits, while with a tube amp players will knowingly push right up to it and past it.
My personal rule of thumb, and I don't have any scientific basis for this, has always been to budget about 50%-100% more power in a solid state amp that I would need in a tube amp.
I can tell you anecdotally that the TAE's speaker volume doesn't come on nearly as fast and furious as it does on a 100W tube amp. But many tube amps reach maximum volume by about 2:00 on the dial and only get more saturated, but not louder, beyond that. I can confirm that Boss used a nicely tapered pot for the Speaker Out control because it increases volume in a very gradual and controlled fashion most of the way to full-blast. But I don't really feel confident making a call on "loud enough" until I've played a lot more with the TAE in a live band context. Jury's still out on that one and I probably won't be able to find out until this COVID thing is brought more under control and playing with a band is viable.
If things do follow the "solid state amps need more power" principle, then using the TAE to increase the power of a small amp is going to have some limitations.
For attenuation, however, it's not big deal. If you need more more volume than the TAE's built-in amp can provide, you can simply not use the TAE. Although that means you won't get to use the other capabilities the TAE brings to the table either.
Impressions On Stage Power Amp