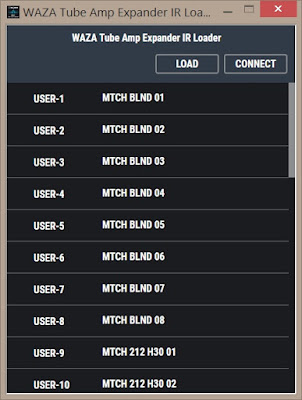 I've spent many hours over the past several days working with IR Loader and the user IR feature in the Tube Amp Expander and I've made a few small discoveries and developed a lot of strong opinions about it.

It works! You can load commercial and homegrown IRs into the TAE and it will use them like it does its built-in cabinet IRs, for the most part. And that’s nothing to sneeze at.  Custom IRs are an incredibly powerful capability because they make the TAE open-ended! If what the TAE offers is not quite right, between IRs and the FX loop there's a very good chance you can expand it to your needs. It's a very powerful capability.
I should also point out that there’s no rule saying your IRs have to be speaker/mic IRs. You can create an IR for virtually any audio treatment you can imagine and record. You can do some pretty sick and twisted things to your sound with custom IRs if that's the way you roll.

However, using the IR Loader app is incredibly tedious.
It takes a long time to convert and load IRs. Actually it's less about the time than it is the fact that you have to load IRs one at a time – you can’t load them in bulk.
I get that it simply takes IR Loader some processing time to convert the IR file. But I do wonder how much of the total time is spent simply transferring the IR to the TAE. IR Loader communicates with the TAE via MIDI over USB (it requires you to select the TAE as the input and output MIDI device on start-up). If IR Loader using MIDI SysEx to transfer the IRs, that is almost certainly a lot slower than what the USB connection can support. It reminds me of the bad old days of loading samples into my hardware sample player using SysEx. It was excruciating.
Other things bog down the process too:

Does this sound like a lot of griping over nothing? Let's do the math.
I actually timed it and it takes an average of 1 minute and 47 seconds to convert, load, rename, and designate a destination slot for an IR. The vast majority of that time is waiting for the TAE to convert and load the IR. By the time I started timing it, I’d gotten pretty efficient at my part of the process, so I don’t think more than a few seconds can be shaved off that time. Now, 1:47 doesn’t seem very long, but it really adds up! Doing the math, it means you’ll spend a minimum of 1 hour loading a full set of 32 IRs. And it's not like you can go watch a movie or something while it's happening. You have to be there every minute and 47 seconds to queue up the next load.
Given that a commercial IR pack can easily include 2X to 10X as many IRs as the TAE can load, all of this makes for a real long slog to audition IR packs! We’re talking 2 to 10 hours of overhead time just sitting around waiting for IRs to load so you can try them all out!
I think this problem goes back to IR Loader's origins: It looks exactly the same as the IR Loader app for the GT-1000 and is clearly a close derivative of that software. The GT-1000 only supported 4 user IR slots, as did the TAE when it was first released. IR Loader would be fine if you were only managing 4 slots. But now that the GT-1000 supports 16 and the TAE supports 32 slots, the devices have simply outgrown the basic app. Boss really needs to release an update to both IR Loader apps with support for bulk import.

A Fistful of Tips

All that said, here are some tips to save time if you want to use commercial IRs with the TAE:
Impressions In the Studio IR On Stage