An Intro to Impulse Responses 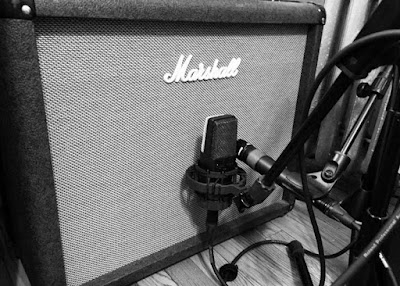 Ultimately the purpose of the Impulse Response (IR) feature of the Boss TAE is to take the sound coming from our tube amp and make it sound like it's been run through a speaker cabinet and microphone. It is acting as a digital replacement for the cab and mic.
There are 2 approaches (that I’m aware of) to tackle digital emulation of guitar gear. One focuses on recreating how the gear works. The second focuses on recreating what the gear does to the input sound.
Digital modeling is an example of the first approach. Modeling can be used to emulate more than just speaker cabinets and microphones. Boss, Line 6, Fractal Audio, and other vendors use modeling to emulate guitar amps and effects (as well as cabinets and mics). Modeling breaks down a device’s various functional components – in the case of a speaker for example, we're taking about the cone, surround, spider, magnet, voice coil, etc. – and simulates each component using a computer model. A model is essentially a mathematical equation that imitates the behavior of the component. Remember that digital audio is nothing more than a series of numbers. The math equations of the models process these numbers to create a new set of numbers, recreating the effect the component has on the sound. A really sophisticated modeling amp could theoretically take modeling all the way down to individual resistors and capacitors, but they generally stay at a higher level than that except for a handful of key components. The idea is that by recreating the parts of the device, you can recreate the sound it makes. The success of the simulation is dependent on whether the designer modeled all the right components and the accuracy of those models versus the real thing.
IR is the primary example of the second approach. With IR, the designer couldn't care less about the individual parts of a speaker or microphone. It treats the speaker and mic as magical black boxes that you put a sound into and get back a sound that has been transformed in some nice way. IR only cares about understanding and recreating the transformation. It doesn't care how it was done in the real world.
You create an IR with a test signal, called an “impulse”, which is a short (typically a half second or less) sound that usually covers a broad range of the hearing frequency spectrum. The impulse is a digital audio file that is literally played through the device you're going to emulate (in the TAE's case, we're talking about the speaker and microphone) and the resulting output is recorded as a new digital audio file. Software compares the original impulse to the recorded output through the device and creates the “impulse response” or IR. The IR is a yet another audio file that effectively describes how the impulse audio changed when run through the device. The IR data can then be imported into an IR loader (such as the Tube Amp Expander) and that same change to the impulse can be applied to any digital audio processed by the IR loader.
The term "IR" can refer to this process I've described. But more commonly it refers to the resulting file that contains the impulse response data describing how the device transforms audio. When people talk about buying, loading, and using IRs, they're usually talking about these files, which as I said, are audio files and come in .WAV format.
The IR process can yield very accurate results. Well-executed speaker cabinet IRs are downright uncanny in how close they get to the real thing. But the process is also inflexible in that it doesn’t allow many options to tweak the end result. You get what you get.
Also, the IR process doesn’t account for variations in the device configuration. You could create an IR of an entire amp and it would be very accurate, but it would only account for the sound of the amp when dialed to the particular settings used when the IR was made. As you know, changing an amp’s volume and EQ makes a world of difference in its sound. That’s why it works best with devices that don’t have many settings and options. Speaker cabinets are perfect candidates. Microphones can have options in the form of pickup pattern switches and such, but there are few enough options on mics that they can be accounted for by recording multiple IRs.
Interestingly, Kemper amp profiling is obviously another example of this "results-oriented" approach to digital guitar amplification. When you read Kemper’s description of the profiling process, it sounds an awful lot like IR. I haven’t played a Kemper, but I can’t imagine the amp would be as successful as it is if they didn’t somehow account for the changes to a profiled amp’s behavior brought about by its control settings. I imagine they vary the impulse by volume and maybe other parameters in addition to frequency and their analysis software can incorporate that information into an amp profile. That would still not account for changes to the amp controls. So maybe it’s some kind of enhanced IR plus some modeling or other algorithms. I wonder… I’m not quite sure as they are understandably vague about the technology behind their products, both to protect their intellectual property and to help maintain an aura of technological magic around their products. In any case, it’s fascinating stuff!
Anyway, that's about as much as you really need to know about IRs to use them effectively in the Tube Amp Expander. You can buy them from vendors like OwnHammer or York Audio and load them into your TAE and use them just like you do the built-in speaker/mic simulations (which are also IRs).
Recording your own IRs requires a bit more knowledge, but it's doable by a home recordist. In a future post, I'll describe the process in more detail and point you to the tools you need to do it.

In the Studio IR TAE 101 Technology