Impressions of the TAE Editor 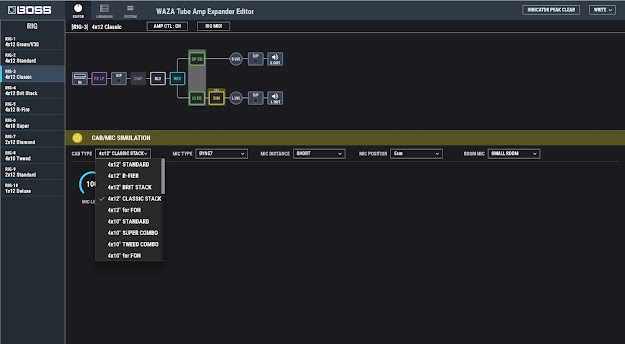 Let's start this post by going through the things that Boss really got right with the TAE Editor. First and foremost it is dependable. I've used it a lot and it hasn't ever crashed. In fact I haven't even encountered a bug yet! Although after 30+ years in the software business, I'm sure the Editor has some bugs in there somewhere. But overall it seems to be well-tested and it works as designed.
Another good thing is that if you already understand how the TAE works and what all the settings do, it's pretty straightforward to use. The settings are where you expect them to be and the app doesn't fight you to get things done.
The Editor's UI employs a variation on the same design pattern you've seen a million times before in other apps, including Windows Explorer, Outlook, or Gmail: a list panel in which you select things, and a view/edit panel in which you view or edit things you select from the list. In the TAE Editor's case, there's a list of the Rigs loaded into the Tube Amp Expander on the left. You select one, and the top-right panel shows the signal chain of the selected Rig with "blocks" (effects, cab sim, EQs, etc.) in the chain highlighted if they've been turned on. You click on a block to select it and the bottom-right panel shows you the editable parameters for the selected block. This a very common UI paradigm that anybody who's used a computer will figure out right away. And the signal chain view is very useful because it depicts at a high level what is going on with each Rig. All of that is solid.
I'll get to what isn't so great in a moment.

One thing you realize very quickly is that the Editor app is not just convenient, it is essential. Without it you'll be very limited in what you can do with the Tube Amp Expander. The reason for that is many of the TAE's fundamental parameters can only be accessed from the app. For example, you cannot adjust the EQs, turn the compressor on and off, or select speaker cabinet sims without it. There is no front panel LCD to provide an always-available, albeit more tedious, alternative to the Editor.
I have very mixed feelings about this. On the positive side, you can create a much better editor with a computer than is possible with a small LCD and a few buttons. However, it also means that the TAE is absolutely dependent on a computer during its service lifetime. So you better hope that the Editor app continues to work as you upgrade computers and Apple/Microsoft issues updates to their operating systems. If the Editor app ever becomes dependent on an obsolete computer or OS, you will need to keep an antiquated system running for as long as you intend to keep using the TAE. I have gear that I've been using for over 30 years – I wonder if I'll be able to keep a functional computer system for editing the TAE for anywhere near that long, and I may regret that aspect of buying the TAE.
There is one very nice way to reduce this dependency that unfortunately Boss did not utilize. I first encountered it with the Soundcraft Ui series mixers. These live sound mixers are console-less stageboxes in which a computing device is used to provide the mixing console user interface. The Ui series doesn't provide an app that has to be maintained across OS upgrades. Instead, the mixer has a web server built in and provides an HTML-based mixing console app that can be accessed over wifi or Cat-5 by a browser running on any device. This means the mixer can be controlled from a phone, tablet, laptop, or even a smart TV. More importantly it means that the control software is more future-proofed because it's built into the mixer and not dependent on a particular OS version. Any browser from any device can access it. And it has a pretty slick GUI too – much more so than the TAE Editor.
Obviously, I wish that Boss had followed that model for the TAE's Editor application. Short of that, I would have at least preferred a mobile device editor over the laptop one. Why? Because I never bring a laptop to a gig if I can help it, but I always bring a phone. Don't get me wrong – I don't have a problem with requiring a computer for the TAE in a studio recording scenario, but for me it's a non-starter for gigging.

The bottom-right panel is where you edit the block you selected from the signal chain. And this is really where the Editor comes up lacking. While it covers all the parameters, it makes very little use of the computer's screen real estate or UI possibilities to make the editing process easier, faster, or more enjoyable. It presents all parameters as either virtual knobs or pull-down menu selections. It makes no use of color, sizing, positioning, illustrations, or alternate UI controls. As a result there are no visual cues indicating organization or function that would help you understand the block and its parameters better. This is especially evident in the parametric EQ editor panel. Nowadays, it's practically de rigueur for DAW plug-in apps to present a parametric EQ as a visual representation of the EQ curve. But Boss just presents a row of identical knobs. It's up to you to figure out what they do. Overall, Boss seems to be stuck in the 1990s when it comes to software.
Also, I have to mention that the virtual knobs are really touchy for certain settings. With a lot of settings, like say Delay Feedback, the knob range is much wider than you typically need. So the useful part of the knob's range is only about 3° of it's entire rotation, and it's almost impossible to use a mouse to dial it in precisely. You'll do better using the up/down cursor key on your keyboard or double-clicking to get the direct numerical entry box, both of which are compromises.
The UI also would have benefited from hover-over tool-tips. There have been times where I've forgotten exactly what a particular parameter did and it would have been nice to find out without having to leave the Editor and bring up the user manual. There are not that many parameters so this isn't a huge issue, but it's very easy to add such things into an app so why not just do it?
One other oddity with the Editor. Why isn't the IR Loader built into it? It's not a huge deal having to fire up a different app to load IRs, but it's really not any harder to build it in either.

Save Early, Save Often

There's another gotcha that isn't really an Editor problem, but will bite you when using the Editor just the same. It has to do with how digital hardware devices with programmable presets work. When you select a Rig (from the Editor or the TAE front panel), that Rig is activated by applying its saved settings to the TAE's current settings. When you're making changes with the Editor, all of your edits are made to the TAE's current settings immediately so you can hear the results. However, the saved settings for the Rig you initially selected remain as they were. You have to explicitly save the current settings to one of the 10 Rig memories slots or they will be lost the next time to switch Rigs. I have forgotten to do this a couple of times and there's no recourse except to start over from when you first loaded the Rig.
Unfortunately there's not a perfect fix here. Saving the settings automatically to the original Rig would not be a good thing: Waiting a couple of seconds for the write to finish after every change would drive you bananas. The best thing Boss could do (and they really need to) is ask if you want to save your edits when you click on another Rig, right before you lose them forever. It wouldn't protect you if you used the TAE's front panel to select the new Rig, but it's a lot better than what it does now (which is nothing) and changing Rigs from the front panel while editing from the app is probably an exceptional occurance anyway.

Bottom line, the Editor works if not very elegantly. And to be honest, a solid working app is not a given these days. But as much as you can tell that Boss put a ton of thoughtful consideration into the TAE itself, it's equally evident that the Editor app was an afterthought. And the IR Loader app is worse. Both apps were clearly designed by engineers rather than user experience designers. And that's a wasted opportunity, and one of the very few areas where the Universal Audio OX is objectively better than the TAE. If you're going to require people to use a computer with the TAE, then at least allow them to take advantage of the benefits of that requirement!
Impressions TAE 101